Roses are Red, Violets are Blue, Come Join our Conference, Full of Tips for You! 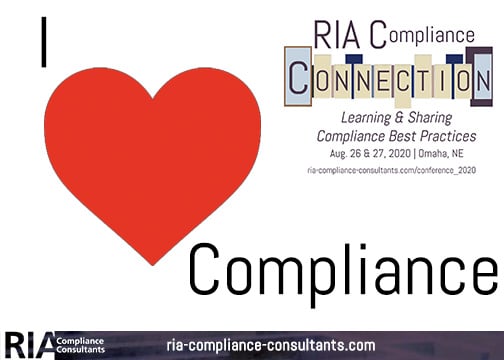 Last week, RIA Compliance Consultants hosted a webinar entitled “How to Report Elder Abuse to Adult Protective Services” in which a state securities regulator and an official from a state’s adult protective services agency discussed how an investment adviser firm can more effectively report elder abuse and better protect its senior and vulnerable clients.

Yesterday was the fourth annual Compliance Officer Day, a day to recognize and appreciate the work done by compliance professionals. RIA Compliance Consultants recognizes the 24/7 role demanded of compliance officers and personnel. We would like to thank you for your tireless work at building ethical cultures and helping your colleagues do the right thing. In appreciation to your dedication to compliance, we are offering a 25% discount on all of our Sample Compliance Forms and Compliance Training Webinars. Click here to shop on our online store. The 25% discount will be applied automatically at checkout.

On October 23, 2013, the U.S. Securities and Exchange Commission (“SEC”) issued a press release (Release No. 2013-226) indicating that it sanctioned three investment adviser firms “for repeatedly ignoring problems with their compliance programs.” The SEC’s enforcement actions are the result of the investment adviser firms each failing to effectively act upon previous warnings and correct compliance deficiencies that had been previously identified.  In the press release Andrew Bowden, director of the SEC’s National Examination Program, stated that, “After SEC examiners identified significant deficiencies, these firms did little or nothing to address them by the next examination. Firms must fix deficiencies identified by our examiners.”

RIA Compliance Consultants is hosting a webinar during which we will provide an overview of the requirement for an investment adviser to develop written supervisory policies and procedures in accordance with Rule 206(4)-7 under the Investment Advisers Act of 1940 (“Investment Advisers Act”). Under this rule U.S. Securities and Exchange Commission (“SEC”) registered investment advisers are required to adopt and implement written policies and procedures reasonably designed to prevent violations of the Investment Advisers Act and the rules that the SEC has adopted under the Act. Most state securities regulations have similar requirements. During this webinar, RIA Compliance Consultants will:

Register for our Virtual Conference→

This website uses cookies to improve your experience while you navigate through the website. Out of these, the cookies that are categorized as necessary are stored on your browser as they are essential for the working of basic functionalities of the website. We also use third-party cookies that help us analyze and understand how you use this website. These cookies will be stored in your browser only with your consent. You also have the option to opt-out of these cookies. But opting out of some of these cookies may affect your browsing experience.
Necessary Always Enabled

Any cookies that may not be particularly necessary for the website to function and is used specifically to collect user personal data via analytics, ads, other embedded contents are termed as non-necessary cookies. It is mandatory to procure user consent prior to running these cookies on your website.